The year is 2022 and the construction landscape has been dealt the perfect storm of events.

After two years of Covid-related pressures that severely impacted builders’ turnover and bottom lines, unprecedented rainfall and construction-cost inflation for labour and materials have further impacted construction sites and businesses in the eastern states of Australia.

It is never too late (or early) to discuss the Builder Financial Review services Newpoint Advisory undertakes and how we can assist in this rapidly changing construction landscape.

The 2022 New Year brought another disruptive and increasingly prevalent factor to bear on construction sites—rainfall. In the first six months (181 days) of this year in Sydney, only 74 days were not affected by rainfall.

To make matters worse, more rain has fallen in 2022 than has ever been recorded by this time of the year: 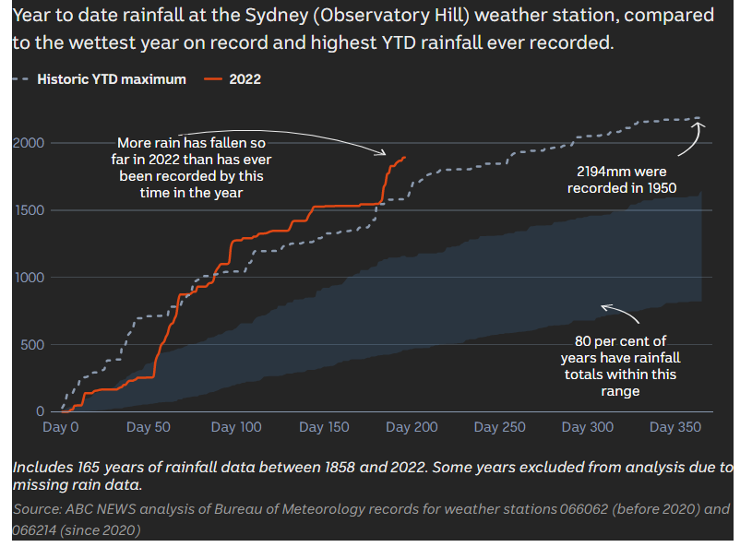 For construction companies, weather-based pressures have been extensive and continue to impact financial performance. Delays caused by weather this calendar year have exposed builders to unbudgeted increases in preliminaries and overheads.

These weather events significantly impact projects both at early and late stages:

Newpoint Advisory estimates that wet weather in Sydney alone, has caused cost increases of 4% for medium/high-density apartment builders. Along with delay costs, the impact has seen many builders realising full year losses due to their second half performance.

There has been a lot of recent Press coverage of the impact of price rises on “Housing” costs. The focus has largely been on materials cost increases and does not take into account the proportions of materials and labour used in construction of a specific project.

Newpoint Advisory has been undertaking its own study, where labour and material costs and the quantities of each have been considered. We have analysed changes in the costs of these items using a live high-density metropolitan Sydney project with a total project cost of more than $150 million.

We have found that total project costs have increased by roughly 10% since June 2021. Construction costs in this case study are split fairly evenly between Labour and Materials at a ratio of 47:53.

Key take aways from our case study regarding labour and materials are:

What Newpoint is seeing and how we can help (before, during AND after)

In extreme cases, builders are seeking to re-negotiate existing contracts and threatening to walk off jobs. These situations are difficult and need to be managed carefully. Common themes are:

In relation to new contracts, the construction industry’s experienced and well-managed builders have identified the disproportionate allocation of financial risk and are reallocating risks to developers and other stakeholders through:

The benefits to builders of this action may be given up over time, after conditions stabilise, due to competitive pressure.

Suggestions for engaging with your builder in the current landscape

Newpoint regularly advises builders, developers, lenders and other stakeholders in the construction process.

Originally featured in The Urban Developer.